During a routine facilities check, the United States Air Force discovered a few of its steel equipment buildings did not meet the frangibility requirements outlined for all airport equipment shelters on one of its bases, so they called on Shelter Works to come up with a frangible building that would meet all the necessary codes.  In this particular case, there were several competing specifications that had to be met. The trickiest, most stringent requirements were: 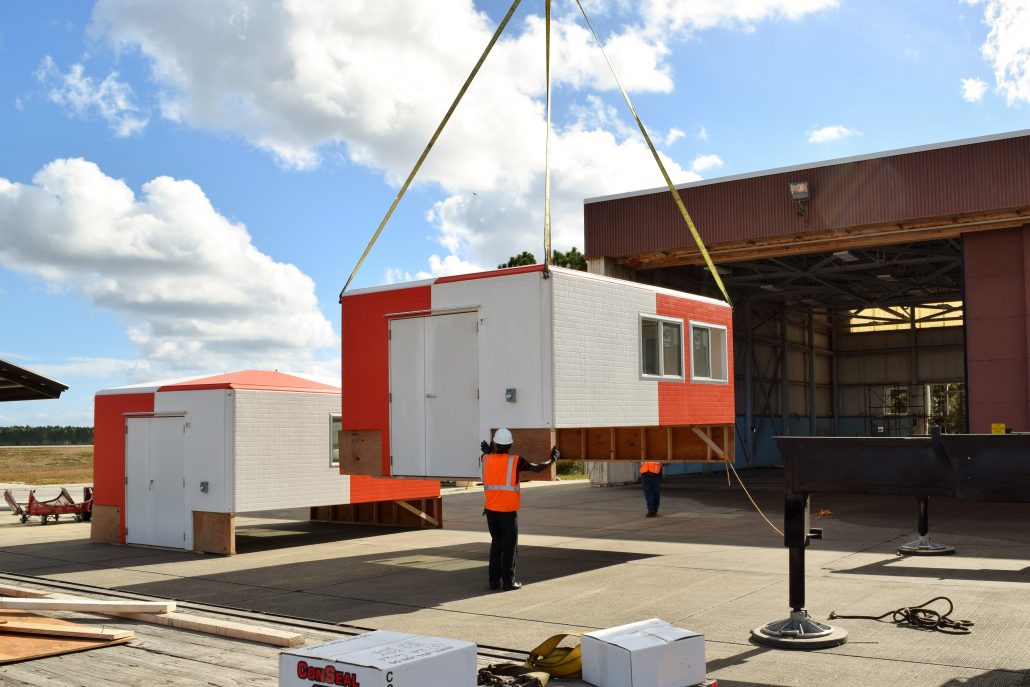 Frangibility is the property of an object to break apart into smaller pieces upon impact. It is a way to preserve Air Force assets in the event of a crash. This is an important characteristic of enclosures that sit out on the runway, and the US Air Force requires that all airport equipment shelters are frangible so as to maintain the integrity of America’s aircraft in the event of a mishap.  The strategy behind this is that if a plane were to land on or near the runway in an unplanned way and hit the equipment shelter, it is better to have the building collapse rather than sustain damage to an aircraft (which is much more expensive to repair/replace).

This particular coastal location is prone to hurricanes every year, so there was also a requirement that whatever structure was developed needed to be able to withstand wind speeds of up to 140 mph (ours can withstand wind loads of up to 162 miles an hour)

Because of the unique characteristics of this project, there were many additional features that needed to be added to this building, like mesh windows (so they wouldn’t shatter as aircraft goes by at supersonic speeds). The building had stringent electrical requirements because it protects Air Force BAK 12 Arresting Gear (this is specialized cabling equipment similar to that found on aircraft carriers that can “catch” a hook on the back of military aircraft that allows the airplane to make a super-fast stop). There’s a 2 foot high knee wall that the structure needed to sit on as well.

How can you develop something that is super-strong (to resist hurricane force wind loads) but crushable (to meet FAA frangibility standards)? Steel equipment shelters don’t meet these requirements…but Shelter Works fiberglass buildings do! Such an assignment is easy for Shelter Works because every building we make is individually engineered to meet the exact specifications for that location and each particular client need.

The contractor on the job (whose name needs to remain anonymous due to confidentiality concerns associated with government contracts) was happy to find out about Shelter Works and said, “The team is really knowledgeable and easy to work with.  They were willing to do the research necessary to ensure that we met all the code requirements that the Air Force had.” The Shelter Works team worked with him to understand and provide all the necessary paperwork.  Air Force officials approved the submittal without delay so the project could continue as scheduled