Because of our high-quality construction, Shelter Works is setting the standard for critical equipment protection to the California Department of Parks and Recreation.

Hasmet Celik, from Celik Engineering Corporation, had to overcome a host a construction challenges in protecting the potable water treatment equipment in the very popular Williams Grove Day Use Are of Humboldt Redwoods State Park which is located 225 miles north of San Francisco.

The 1960’s-era shanty that was previously protecting the equipment was deteriorating, and the engineers in charge were looking for a more secure solution.  “The area gets a great deal of traffic, both from people and from mountain lions, deer and other wildlife,” Celik explained.  “The decision-makers for this project chose Shelter Works’ superior design to provide a more secure structure that would also protect against vandalism and vagrancy.” 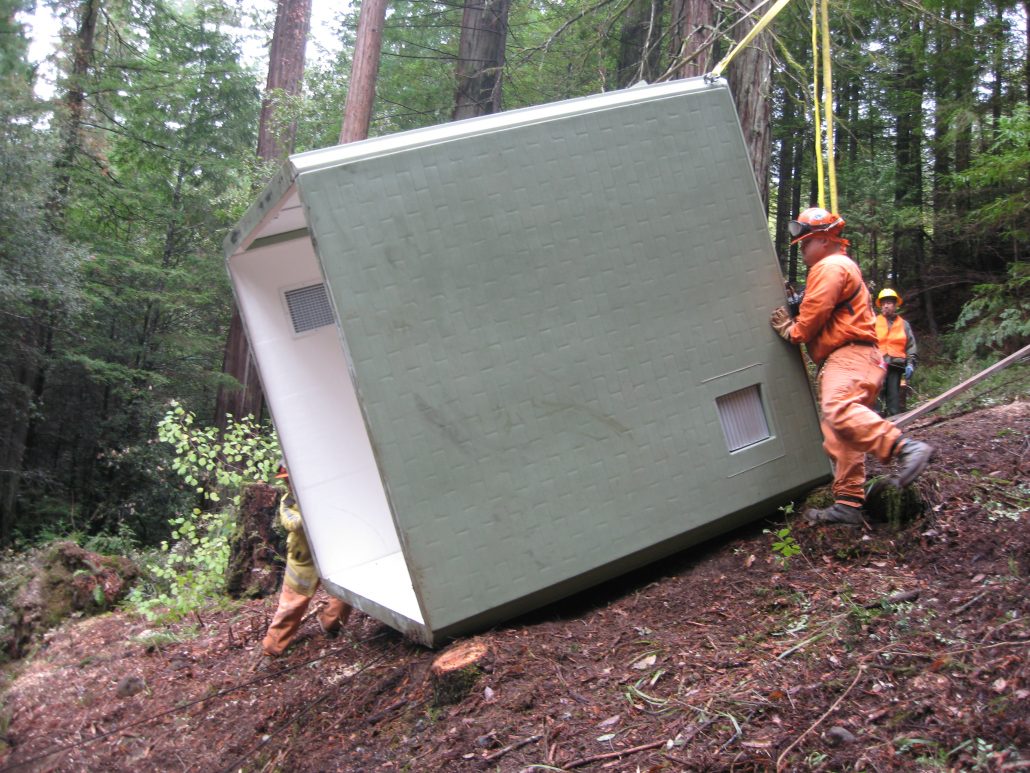 Another reason the design engineers specified a Shelter Works structure is the superior construction of the walls.  It was easy to drill and anchor equipment to the walls using Unistrut. 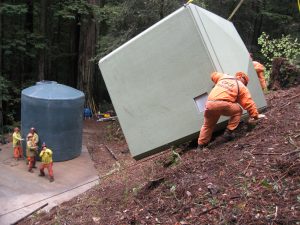 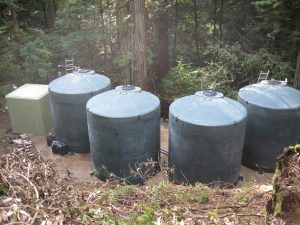 The real challenges were with installation:

Because this is a protected area where spotted owls mate, the window of time for installation is very short (September 16-January 30). This falls in the rainy season, which makes the steep slopes very slippery and soil erosion an influencing factor.

Celik and his team worked closely with environmental experts to determine the best way to install.  With assistance from the local fire crew (who are inmates at the local prison), they were able to lower the building down from above, using the slope and some strategically placed branches to help slide the structure down the hill.  “Because it was so lightweight and was sliding on organic matter (rather than on the soil itself), the building didn’t get damaged—much to our surprise,” Celik explained.  “This shelter worked really well.  We were worried that when we tipped the building on its side, the building might collapse, but it was so well built that those fears were totally unfounded.”

They had to close lanes of the highways to accommodate the crane used to position the building.  “Fortunately, it took less than a day to install because the fiberglass shelter was well-built, durable and all ready to go,” Celik reported.